History of the Industrial Cutting Laser 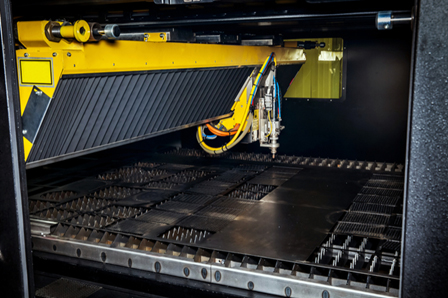 Here at Fred R. Rippy, Inc., we rely on carbon dioxide lasers that enable us to quickly and efficiently cut material such as electric-grade steels, nickel alloys, insulating materials, and more. These machines enable us to provide a valuable service to many different customers, including the aerospace, electrical, industrial, and automotive industries. But where did the CO2 laser come from, and how did it come to be one of the most widely used tools in parts fabrication? Here are a few history facts.

During World War II, physicist Charles Townes built radar and microwave systems for Bell Laboratories in order to study the structure of atoms on a millimeter scale. When vacuum tubes and radar turned out to be a bad method for this, he conjectured that the atoms themselves could measure each other if enough were emitted at once. They assembled a machine in 1954 that could “stimulate” emission of ammonia atoms to measure its emission spectrum, and this proved successful, efficient, and repeatable. An associate of his by the name of Arthur Schwalow then suggested that the atoms could be further concentrated if allowed to pass through a narrow cavity with mirrors at each end, one of which would be partially slivered to allow the atoms out. The principles they learned guided another physicist Thomas Maiman to create the first ruby laser in 1960.

In 1963, scientist Kumar Patel at the Bell Laboratories developed the first carbon dioxide laser. Less costly and efficient than the ruby laser, it was further developed by the Deputy Scientific Director Peter Houldcraft at the Welding Institute in Cambridge in 1967. A laser cutting nozzle was connected to an oxygen pressure system that further guided the laser towards the material it cut, enabling the first prototype to cut a 1 mm thick sheet of metal. By 1969, Boeing proved that a CO2 laser could cut a material as durable as titanium. And by 1979, the Italian company Prima Industrie invented the first 3D laser-cutting process that Fred R. Rippy, Inc. uses today.

We at Fred R. Rippy, Inc. are indebted to the many men and women that have and continue to advance the technology of laser cutting and lamination. If you are in need of custom laser laminations, please contact us today. We’d love to assist you and answer any questions you may have about our process.